“Hold up!”, Rick yells as we are coasting down a hill into an expanse of green, rimmed by jaw dropping Karst mountains.  I quickly brake and turn to see him stopped in the middle of the deserted road, helmet off and looking perplexed.  “What’s wrong?”,  I holler back.  He grins.  “Butterfly in my helmet.”  We both laugh.  Butterflies and grasshoppers the size of your hand, green landscape as far as the eye can see.  Mountains.  Rivers. This place is unbelievable.  Hiding amid Thailand, China, Cambodia and Vietnam is a real gem.  Laos.

Tired of planning vacations, we opted for a cycling tour of Laos.  It fit the criteria.  It required no planning and just an hour flight from Bangkok.  The “tour” turned out to be me, Rick, Tee (the driver) and Ked (the guide).  Bikes included, hotels booked, luggage shuttled in the van.  Cycle from Luang Probang to Vientiane in 5 days.  With an average of 60 kg per day, we felt confident that it would be fine.

Except that we hadn’t really ridden our bikes seriously in awhile.  Now, we ride everyday.  But, you have to remember, we live in Bangkok where the biggest hill is the roadway that goes up and over the many khlongs (canals) that spiderweb their way around the region.  This is not an exaggeration (I’ll do that later in this blog).  There are no hills.  Zero. So, 60 kg in much of Thailand is a 3 hour walk in the park.

So, when I start up the 5 percent – four mile long, climb on the first mountain pass, the internal monologue begins.  “Slow and steady wins the race”, I chant to myself.  “The mind gives up long before the body”, I think.  And as my good friend, Christie, used to say, “Hills are our friends.”  This positive self-talk works for awhile.  And then a stroke of luck.  A distraction!  As we pedal at a pace of about 5 miles per hour, a group of school children are walking home along the road.  One little guy, maybe 7 or 8 years old,  starts running along side me. “Sa ba di !  Hey! Where you from?”, he shouts and grins.  “Thailand!”, I pant.  “You know English?”, he asks.  And the English lesson begins.  Me riding – him running next to me.  “What’s this?”,  he shouts as he points to his arm.  “Arm”, I reply as I down-shift.  “What’s this?”, he yells as he gestures toward a tree.  “Tree”, I grimace as I remind myself of the great exercise I am getting.  Then, in mid-stride he takes off his flip flop and holds it in my face.  “What this?”, he demands.  “Shoe”, I gasp.  And without missing a beat, he quickly slides the shoe back onto his foot – all the while, keeping pace with me.  It goes on like this for about a mile.  Then, he smiles and points to a winding path and trots away waving and shouting “Bye bye!”.  He’s home. 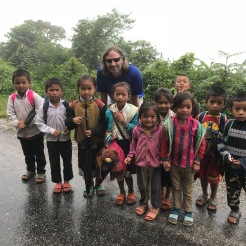 These are the ones that ran up the hill with us!

We reach the top of the pass completely exhausted.   But, we are met with incredible views, a cool breeze and lunch.

Looking out over the vista, it’s hard to believe the history of this quiet nation.  From 1964 to 1973, as part of the now infamous Secret War, the U.S. (supporting the monarchy against the communist Pathet Lao) dropped more than two million tons of of bombs on Laos during 580,000 missions.  This is the equivalent of a planeload of bombs every 8 minutes, 24 hours a day, for 9 years – making Laos the most heavily bombed country per capita in history.   While this is a tragedy in itself – the secondary tragedy continues today.  Out in that beautiful expanse of green are an estimated 80 million live bombs.

80 million undetonated cluster bombs.  Most the size of a tennis ball.  All deadly. 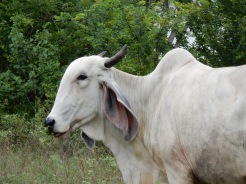 And we continue our spectacular ride. Our guide, Ked, shares that he is from the north.  His village, he explains, is not too different than the ones we are riding through.  Tranquil rice paddies.  Water buffalo grazing.  Little children running to the side of the road to see the foreigners.  Waving and and grinning. “Sa ba di!”, they yell.   “Sa ba di!”,  we wave back.  So many little children.  With 70 percent of the population under the age of 30, most people were not even born to witness the bombings.  Later, we found out that many don’t even know about the bombs or UXO (Unexploded Ordnance).

On our fourth day of riding we reach the Nam Ngum reservoir.  Created by the Nam Ngum Dam, this is a huge lake covering 250 square kilometers.  Controversially known as the “battery” of SE Asia, Laos has many hydroelectric dams along the Mekong and its tributaries that help power the region.   We haul our bikes onto a tiny boat and begin our relaxing and picturesque two hour crossing. On the way, out boatman points to an island. “Prison”, he states solemnly.  Ked proceeds to tell us that only “very bad” people go there.  And this must be true because according to the  1979 New York Times article I read on the internet, and I quote,  “The camps are called ‘reeducation centers for social evils.’ The inmates, according to official explanations, fall into three categories: drug addicts, prostitutes and hippies.” Then, our boatman points to another small boat overloaded with reeds – heading to the prison.  Ked explains that the inmates use these reeds to  make simple baskets that are used in daily life. Things like sticky rice steamers, chicken pens and sieves used to strain liquids.  Hard labor.  That’ll whip those hippies into shape!

After five days of riding through some of the most beautiful landscapes I have ever witnessed, we arrive in Vientiane, the capital.  Located on the Mekong River, it’s a quiet city and easy to get around.  Saddle sore, we wander and eat and get massages.

With Ked. Sad to say goodbye to him.

But we still have bombs on the brain, so we visit the COPE museum , whose mission it is to educate the public on UXOs from the Secret War.   We learn that children are often the ones to find the bomblets while they are playing.  And, because the small cluster bombs look like a toy – kids will throw them like a ball – with tragic consequences. In 2016, President Obama visited Laos and committed an annual 90 million dollars – for three years – toward the effort to clear these bombs in the next 10 years.  I haven’t heard that Trump is repealing this.  Let’s keep our fingers crossed and hope that it doesn’t cross his desk.

And as the sun sets on the mighty Mekong, I can’t help but think how the dark and the light meet.  How an incredibly beautiful and friendly country can still be plagued with the remnants of a war that ended 45 years ago.  How a nation of youth must deal with the the mistakes of the old.  And, how like everything in life, there is either no easy answer or no answer at all.

4 responses to “Butterflies and Bombs”